A-Z Content, Page Guide
ABC-ÇDEFGHI-İJKLMNO-ÖPRS-ŞTU-ÜVWX
A
B
C-Ç
D
E
F
G
H
I-İ
J
K
L
M
N
O-Ö
P
R
S-Ş
T
U-Ü
V
W
X
“
3
Çanakkale Ceramics Collection
One of the last ceramic production centers of the Ottoman era was Çanakkale. It is known that since the end of 17th-century ceramic production existed, and until the 20th-century red clay ceramic production has been observed in Çanakkale. During the 18th-century vessels such as plates, bowls, flasks, trays, large jars, pitchers that were a part of the daily life routine, were produced with underglaze technique. Decorations were made by using colors like cobalt blue, brown, manganese purple orange over white astar with free brush strokes and over them colorless, transparent glaze was applied. Flower rosettes, fruits, cypress trees, floral patterns like leaf bouquets, mosque silhouettes, sailboats figures characteristic to Çanakkale were applied on the surfaces of these containers in a stylized fashion. These ceramics belong to a group of very simple and abstract decoration style. The most widespread practice were the diagonal lines forming lattice borders on the rim edges of the vessels. During the 19th and 20th-centuries in Çanakkale workshops single colored glazed ceramics were produced. During this era, also overglaze decorated ceramics were produced.

Amongst the late period Çanakkale ceramics it is possible to observe more fanciful practices. Some of the knobs of the lids belonging to this period were shaped as horses and birds and in another group these figures were applied on the surfaces. Flower and leaf even some animal figures were formed as high-reliefs.  The objects produced during this period reflect exaggeration and imagination

The pieces produced in Çanakkale that had souvenir or memorabilia qualities were bought and started to enter collections such as Pairs Sevrés Porcelain Museum, London Victoria and Albert Museum, Athens Benaki Museum and some other collections since the mid-19th-century. Accordingly, Çanakkale ceramics of the Ankara Orchard House both signifies the late Ottoman ceramic art and the 19th-century tourism. Ceramics in the Ankara Orchard House Collection are exhibited on the third floor. 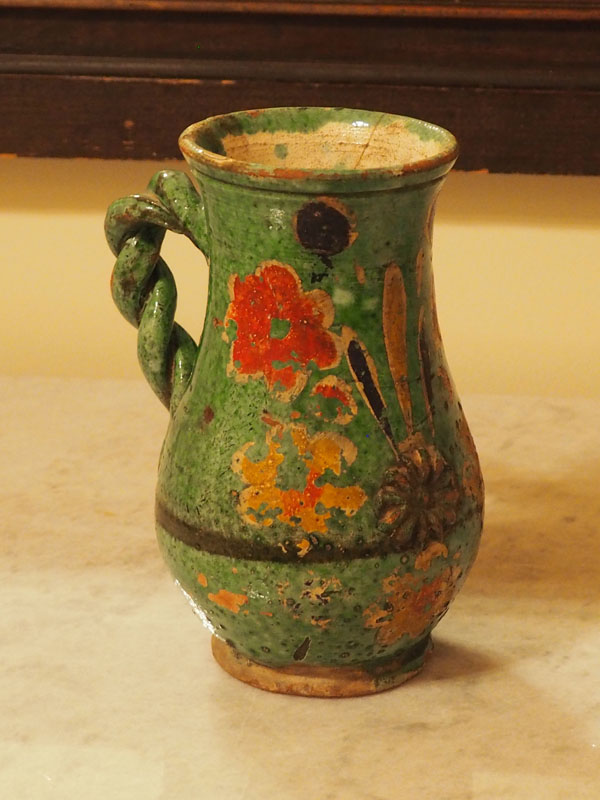 The pitcher has a fat belly that narrows down towards the rim. The lips of the rim are slightly pulled outwards. The pitcher resembles a pear form altogether and has a single handle and a ring base... Click for detail information.
When you visit a website, information is stored in your browser, mostly in the form of cookies. This information may be about you, your preferences or your device, and is often used to make the site work as you expect it to. The information does not usually identify you directly, it is meant to provide you with a more personalized web experience. You can choose not to allow some cookies. Click on the different category headings to learn more and change our default settings. Cookie Notice
Necessary Cookies
These cookies are necessary for the website to function and cannot be turned off in our systems.
Statistical Cookies
These cookies are used to provide insight into how we can improve our service to all our users and to understand how you interact with our website as an anonymous user.
Targeting Cookies
These cookies are used to create your profile and provide ads relevant to your interests. It is also used to limit the number of times you see an ad, as well as help measure the effectiveness of the ad campaign.
Cookie Policy
Cookies are used to personalize content and ads, to provide social media features and to analyze our traffic. You can accept all cookies with the "Allow All" option or you can edit the settings with the "Customize Settings" option.
Customize Settings